We need to collect data from at least 200 participants, Click on NEEDS ASSESSMENT
Needs Assessment

Alone Believes in The Power of Women Their Own Lives. 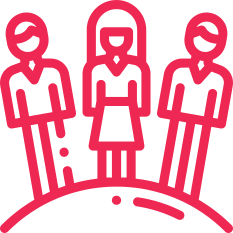 Fundraising can change the future

Become a subscriber to our email newsletters for the latest new

As a social assistance organization, our mission is to enhance the quality of life of Deaf and Hard of Hearing (DHH) people by:

Deaf Access to Quality of Life will offer a continuum of mental health care, allowing clients to move through different levels of care and participate in the greater community at all levels.

Projected programs and services will include:

Program prioritization will be dependent on the outcomes of needs assessment and grant funding. Still, our ultimate goal is to provide effective cross-disciplinary services, which will result in the best care for our clients.
We need your talent, ideas, donations, and grant writing expertise.

We want to ensure that Deaf Access to Quality Life is a caring and responsive organization. We would love to discuss ways to better support and empower the DHH Community! If you are interested in providing advice and support, please contact Makoto Ikegami at (470) 763-5282 through videophone or email at makoto.ikegami@daql.org. If you have any suggestions or guidance concerning relevant funding opportunities, or if you have expertise in grant writing, please contact Rod Goodwin at (202) 904-7892 or email at rod.goodwin@daql.org. We appreciate your support and look forward to working with you.

I Want to Donate

Before the Rehabilitation Act of 1973 was passed, many Deaf and Hard of Hearing (DHH) people struggled to access both public and private, government and community resources available to all citizens, including mental health services. Over the course of many years DHH people, their families, and concerned organizations have filed lawsuits in several states including Missouri, South Carolina, Alabama, and Georgia in an effort to expand and secure access to those services. And it is largely because of those lawsuits that these states were able to develop specialized mental health and substance abuse services. And as evidenced by these suits, there continues to be a need to remove the barriers that exist so that DHH people can have equal access to mental health services in the United States.

In 2011, the State of Georgia reached a settlement with two deaf adults (Renita Belton and Matthew Erickson), who were profoundly mentally ill and developmentally disabled. Because of their deafness, they were denied access to mental health services unlike individuals without such disabilities. According to the court documents, it is estimated that Georgia has approximately 3,387 deaf individuals who also suffer from severe mental illness. Many hundreds of deaf Georgians have been denied both basic and meaningful support from public health services. Deaf individuals are still not able to receive therapeutic benefits from group mental health facilities because of the lack of ASL (American Sign Language)-trained staff.

Georgia has no group home facilities designed to accommodate DHH individuals who have a mental illness. There was a follow-up hearing on September 17, 2018, and Judge Richard W. Story expressed concern about the lack of accessible mental health services for DHH people in Georgia. We must recognize the need for mental health and substance abuse services for DHH people. At the same time, we must address the struggle of many states and service providers to recruit and maintain professionals with the cultural and linguistic competencies to work with deaf and hard of hearing people.

The National Association of the Deaf has made several position statements about mental health services for DHH people. They have asserted that DHH people in the United States need to access mental health services through direct communication. There is a lack of recognition of the cultural and linguistic needs of deaf and hard of hearing people with serious mental illness in accessing healthcare providers at the state level. Also, there is a lack of coordination with academic institutions that educate and train mental health professionals to become culturally and linguistically competent to meet this population’s needs. These deficiencies in state policies have continued to be significant issues at the state level and below.

Because this situation continues to exist, in 2019, Deaf Access to Quality Life (DAQL) was founded to empower the Deaf community in Georgia to address the challenges faced by a lack of culturally and linguistically competent mental health services for DHH people.

In addition to offering mental health services for DHH people in Georgia, DAQL acts as a launching pad to provide empowerment and advocacy to help members in the Deaf community obtain safe and appropriate accommodations and have reasonable and competent access to the full range of available services. DAQL recognizes the necessity and importance of generating more professional education opportunities for mental health professionals to develop clinical practice skills. DAQL will enhance knowledge about DHH people with serious mental illness, especially appropriate and effective interventions for those who have language dysfluency. DAQL will also address the lack of education and training opportunities for professionals working with this population. There is a need to address the lack of understanding of Deaf culture in a society that harms the dignity and rights of DHH people with serious mental illness. DAQL demonstrates leadership to advance cultural competence within and beyond our organization, challenging institutional oppression and building and sustaining inclusive institutions and communities. DAQL is committed to being a social change agent that demonstrates the leadership skills required to work effectively within families, schools, service providers, and organizations that lack specialized knowledge about DHH people with serious mental illness.